Soil stabilization is a group of earthwork technologies to improve soil characteristics during the construction process and to improve mechanical and load bearing properties. The two main technological methods are soil improvement and soil consolidation.

Soil stabilization methods are used in heavily soaked soils, which as a result, cannot be sufficiently compacted or are not suitable for construction traffic. By mixing in binding agents (mostly lime, cement, or mixtures of both) water content is reduced, and the material’s plasticity, compactness, and load-bearing capacity are immediately improved.
.

In soil improvement, binding agents are mixed into the existing soil to improve its paving properties and compactness making the soil highly unsusceptible to water at the same time. These improved material properties facilitate the completion of construction work on the terrain.

Soil consolidation is also achieved by mixing binding agents into the existing soil, which improves its volume stability and permanent bearing capacity, making it frost-resistant at the same time. Typical applications of soil consolidation are in the construction of roads, railways, and airports, as well as in the development of industrial estates or new housing areas.

The most beneficial application of soil stabilization is when it is taken into consideration right from the design phase. If mechanical properties of the stabilized earthwork are counted for then upper structures can be designed accordingly and considerable cost reduction can be realized.

On the other hand, due to extreme weather conditions and unforeseen soil conditions, the need for soil stabilization is only realized during the construction process. In these situations, to avoid excess cost and construction delays, usually, the only possible technology is to stabilize the existing soil.

Improved load-bearing capacity: Soil stabilization with lime or cement results in an immediate improvement of the soil’s mechanical properties, increasing its bearing capacity at the same time.
Optimum water content: Mixing binding agents into the existing soil achieves optimum water content. Soils that were muddy and wet before soil stabilization are now much better suited for the handling, placing, and compacting.

Environmental friendliness: Soil stabilization is an environmentally friendly method since it requires significantly less transports when compared to soil exchange while saving precious natural resources at the same time.
Improved weather resistance: Soil stabilization results in an improvement of the soil’s bearing capacity both in the short and in the long term, making it resistant to water and frost.

Homogeneous mix: Soils from many different sources are often transported to one job site. Soil stabilizers produce a homogeneous mix from these soils of different origins.

In this soil stabilization technology, the main binding agent is cement, though complementary additive can also be used as needed. Technological variations are SOIL STABILISATION, SOIL CONSOLIDATION, and SOIL IMPROVEMENT with cement, which is the most commonly used today. In soil improvement with cement, the prime goal is to facilitate site roads for the construction traffic.

On soil improvement job sites the binding agent quantity and the mixing depth are usually specified with the help of experimental figures. Applying this on trial sections with alterations of quantities and depth, the final technological parameters can then be decided.

In general, optimum search is carried out to reach minimum binding agent content and cutting depth while achieving the required mechanical properties.

Soil Stabilization and Consolidation with Cement

The main difference between the two technologies is that for stabilization, the planning parameter is CBR% (Californian Bearing Ratio) while in the case of consolidation the measured parameters are single-axis normal strength or pull strength and Young’s modulus.

In the case of finely pulverized soils pre-treatment might be necessary with lime to facilitate cement stabilization. 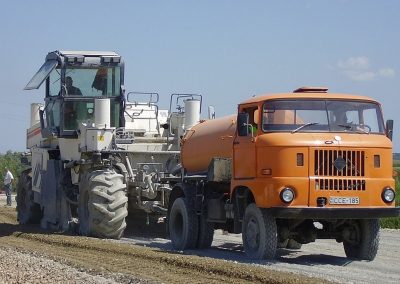 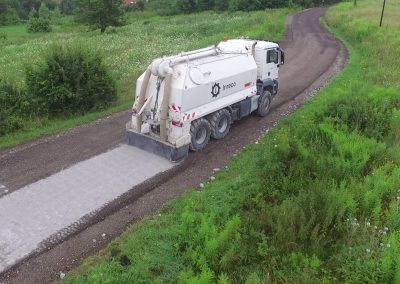 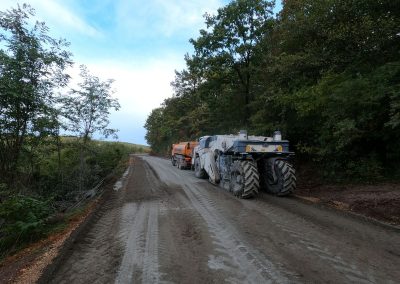 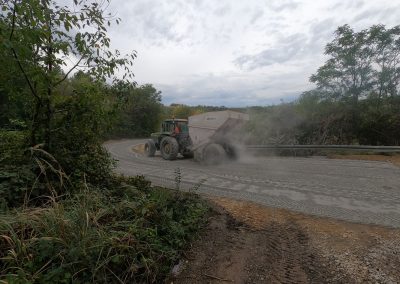 Lime is mixed into the soil to reach immediate improvement of geotechnical characteristics. The primary goal of this technology is decreasing water content and reducing plasticity, thus improving mechanical properties for the construction process.

This technology focuses on improving certain required properties of the soil without observing water and frost resistance. In general, Soil Improvement is usually a decision made while construction work is in progress to help on-site construction traffic and to ease working with problematic materials.

In addition to the immediate benefits of soil improvement on the construction site, in soil consolidation technology long-term properties of stabilized soil are ensured. Utilizing laboratory testing and careful planning of chemical and mechanical changes in the soil, long-term properties, such as shear strength, load-bearing capacity, water and frost resistance can be achieved. 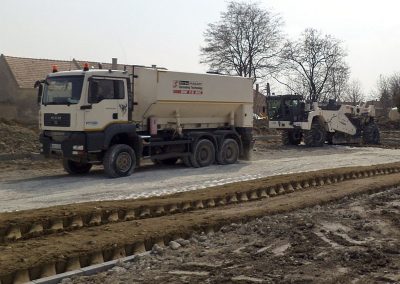 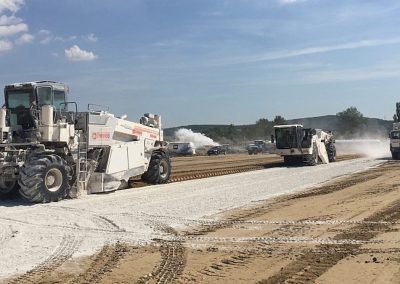 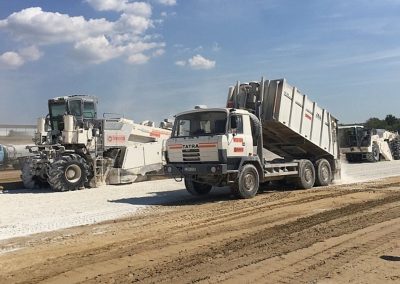 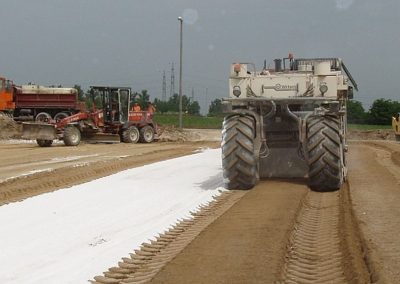 Binders are usually cement and lime, which can be sprinkled separately, however, special premixed additives have become available for sprinkling in one pass.

As the most undesirable characteristics of soil are mainly related to water content, these chemical additives usually aim to change the undesirable behavior in the interaction of soil and water. These chemicals can prevent the chemical bonding of the absorbed water or in other cases can provide the necessary water content needed for practical cohesion.